In a book of meditations, originally given in a Lenten series, Donald Hilton, United Reformed minister, suggests that Jesus died not knowing the answer to his cry of dereliction, “My God, why have you forsaken me?” If God had given him conclusive evidence that his darkest hour would also be his hour of greatest glory, Donald Hilton asserts, there would have been no glamour in the events that led to Calvary and the gospel would be found on the fiction shelves of the local library! There were no miraculous signals or mysterious voices to answer his cry. Yet, as we observe Jesus’ anguish, we can be sure this awful and terrible experience was no denial of all that had gone before. He, who in his lifetime became the friend of publicans and sinners, to whom people brought their sick to be healed; he who so clearly triumphed over evil when confronted by it, was not at the last reduced to defeat. Matthew, Mark and Luke go on to tell us simply that Jesus gave another loud cry and gave up his spirit. But in the fourth gospel, John contends we should know a little more – that Jesus died with the shout, “It is finished!” Not to be mistaken for a declaration of resignation. Rather, the cry of a man who has been through his hell and accepted the torment and triumphed over it. Light shone in the darkness! God was in it all.”When the centurion and his soldiers who guarded Jesus saw what was happening, they were awestruck and said, truly this man was the son of God.”

It is as we see the cross through the eyes of the centurion that we are able to penetrate the undoubted mystery of the crucifixion and see God’s purpose fulfilled and be able to say with Charles Wesley, “didst thou not in our flesh appear; and live and die below; that I may now perceive thee near and my redeemer know.” (Hymns & Psalms: 184) What is important and must be said is that however the cross moves us to respond positively, it may differ from the way in which our neighbours in church have come to understand what it means for them. Dr Sir Alan Walker, the Australian Missioner, wrote a book with the title The many-sided cross, so-called because there is no insight, no doctrine, no school of thought that can possibly express the whole truth of the crucifixion. Alan Walker wrote, “It is like a diamond. Hold the diamond to the light, turn it about in the hand, light will flash and reflect in many colours the beauty of the stone, but what we see will depend from which angle we look at it.” From one angle the cross can be seen as a sacrifice; an innocent young man dies instead of, and on behalf of, sinners. From another perspective the cross can be seen as a demonstration of the love of God: a man dies not just for his friends, but for his enemies; a love that overwhelms and draws our response. So we could go on – there are other theories about the cross sincerely held by Christians, each one touching on a segment of the whole truth. However if it remains no more than theory, the death of Jesus achieves precious little for us. For whatever else may be shrouded in mystery, however much we may be puzzled by it and whatever may be said, one thing is true – in some strange and wonderful way, through the cross the power of God is released among us and our birth right – “made in the likeness of God”– is not just a dream, but a dream come true. The mechanism of the cross may remain a mystery for ever, its power need never be in dispute. 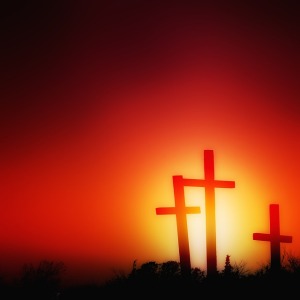 When a convicted murderer is condemned to death in the USA, or any other state for that matter, there is more than one way of doing it. When execution is by lethal injection it is supposed to be a more humane method than any other. Whether it is less barbaric than hanging or electric chair or whatever other form execution might take, are not all executions degrading and inhuman? Death by crucifixion in Jesus’ time, was the method used by Rome when slaves or the worst kind of criminals were its victims. The Romans themselves regarded it as the cruellest and most hideous of punishments. Little wonder the first evangelists ran into trouble when they preached the gospel of Christ crucified. It was absolutely ludicrous to suggest Messiah should be condemned to die nailed to a Cross with two criminals on either side of him. For him to die by crucifixion was beyond belief.

Yet, in spite of the ignominy of it, Christians down the centuries have cast a halo of beauty round the cross. In church they sing of the wondrous cross on which the prince of glory died. St Paul explains where he stands in relation to the cross. “I decided to know nothing among you,” he says, “except Jesus Christ and him crucified.” This is no attempt to add a touch of glamour to the appalling circumstances of our Lord’s demise on a green hill outside a city wall. What Paul does is to state in the strongest possible terms the centrality of the cross for us. At the heart of our preaching and faith is the good news that Christ suffered and died for our salvation. Of course, the cross in itself cannot save anyone: Jesus himself is saviour. Nonetheless, the New Testament maintains the cross was not only inevitable but essential. If Jesus had said, “Father, you ask too much, I cannot go through with it,” it would have brought the mission to a full stop, there and then. To submit to this heinous act would signal to those who schemed to get rid of him that they held the trump card! It is not easy for us to appreciate how uncertain he must have felt allowing his prosecutors and persecutors to have their way. “Prove yourself, come down and save yourself”, they taunted. And Jesus’ response, “Father, not what I want, let your will be done”. There must have been considerable turmoil within as he considered the possibility that God’s way just might be the wrong way. Think of the terrific struggle he underwent in Gethsemane! Knowing what crucifixion was like, the thought of its excruciating agony and pain, the record tells us, brought the sweat out of him, “like great drops of blood falling to the ground”! At the end of the day, and we are not telling the whole story, the green hill spectacle defies description. We would be utterly, totally arrogant if we did not feel for him.

Attempts have been made to provide a more acceptable explanation for Jesus’ desolate outburst from the cross, “My God, my God, why have you forsaken me?” – a quotation from Psalm 22. It is difficult to see how they have transformed that agonising cry into a shout of trust and confidence! But if we are looking for further enlightenment, does this form of cosmetic surgery enable us better to kneel beneath the shadow of this instrument of cruelty and injustice? William Barclay‘s reaction to what he labels “this fanciful interpretation” – on a cross a man does not recite poetry, even the poetry of a psalm.